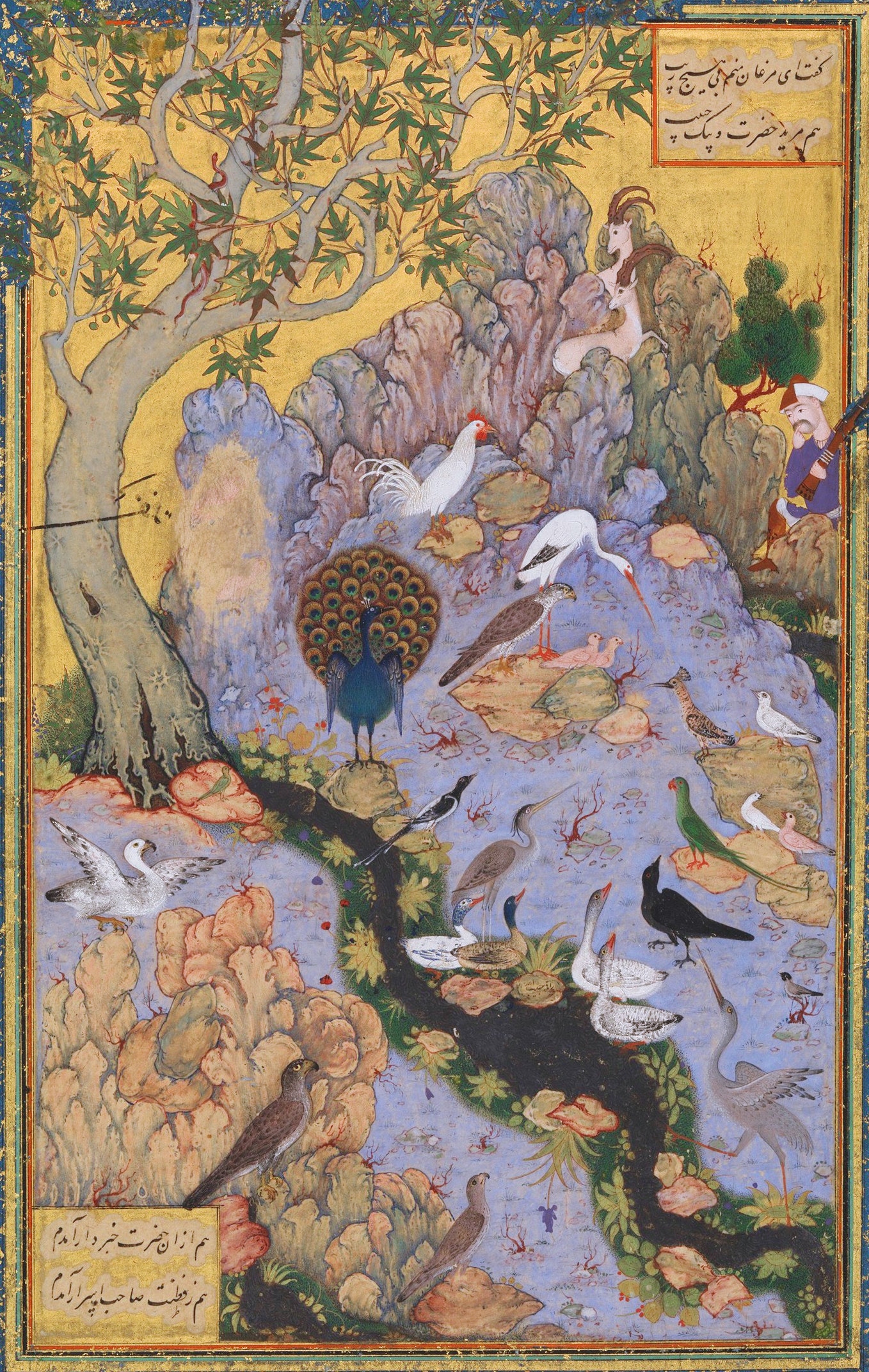 Painting art in Persian Plateau has a long history, From 40,000 years old cave painting to Persian culture golden years during Achaemenid Empire and Sasanian Empire to recession of Persian culture during Umayyad dynasty and rising again after six hundred years in 13th century AD are all part of Persian painting vicissitude history.

Achaemenid  Empire had a great impact on culture by incorporating various peoples  of different origins and beliefs Before Islam, with the establishment of  the Achaemenid empire and the empire dominating over the vast lands,  and the cultural mixing of people in the conquered territories, the  culture of this era came together in the present form.

With  time passing by, and the influence of various cultures from Western  Asia to Greek (Hellenistic) civilization, the culture of this region  took on a new form.

Little  by little, with the passage of various ages during the Sassanid Empire  in the 3rd to 7th centuries AD, Persian culture and art had flourished  in Persia.

The  Sassanid kings paid particular attention to the mural of their palaces  and the face portrait painting of the royal family in special books.

In  addition to showing the greatness, authority, and the luxury of the  Sasanian kings, the Negar gari art of this era expresses well the  culture of the people of this land.

The importance of the art in pre-Islamic Persian culture was to such an extent that in this timespan,  a man named "Mani" claimed to prophesy and promoted his religion by  drawing on ideas from Buddhism, Zoroastrianism, Christianity, and  Mithraism.

Mani  led groups of painters to deliver the "Manavi" faith in various areas,  to invite people to this religion by drawing on "Manavi" topics. The  position of painting art among the people of the Persian plateau of the  Sassanid era was to such an extent that Mani the Prophet considered his  miracle as painting.

An  important historical point that has greatly influenced the art of  Persian painting has been the government's approach to Mani and his  followers; this attitude led the followers to cross from China to Africa  and Europe, on the other hand, the followers of this cult were able to  be well received in different societies due to the beliefs of the  Manavi, which were a combination of the different religions of their  time. By the migration of the Mani’s followers, Persian painting art has  been transferred all over the world and it remained safe from various  historical disasters, in a safe space far from its motherland.

In  the 7th century AD, with the arrival of Islam in Persian plate, a great  cultural change took place in this land; The ruling class, all the  beliefs, and the previous lifestyles were transformed at once and a  dynasty of a very different culture ruled over the people of the land.  Due to religious, political and social issues, the art of painting was  banned in the Persian Plateau for seven centuries and unfortunately the remains of the previous were destroyed.

It  was not until the 13th century when the Abbasids dynasty, who were  completely influenced by Roman and Persian culture, came to power that  the prohibition of painting art ended. At first painting art was only  used in the form of illustrations of fiction stories and science books.

Another  important historical event that greatly influenced the art of Persian  painting was the conquest of Persia territory by the Mongols under  Seljuk rule, With  the conquest of Persia, the two great countries of China and Persia  established close relations with each other so cultural and commercial  links between were established. This important historic event brought  back the painting art which had been taken to Eastern lands by "The  Manichaeans" seven centuries before to its homeland, the land of Persia.

The  art was still limited by the public opinions and the governments, so  the growth of this art subsisted solely in books illustrations only.

Until  the 16th century AD, after rising the new Safavid rule, due to the new  cultural and commercial relations between European countries with  Persia, some limitations on the painting art were gradually reduced. It  is during this period that for the first time after Islam, there was a  trend towards portrait painting and miscellaneous “negargari”. These  reforms and removal of restrictions continued slowly until the 19th  century and the Qajar era and it was during this time that the  relationship between the European and Persian painting schools  culminated. After this stage, the limits of the painting were removed  for the ruling class and the commons, and the art of Persian painting  entered its modern era.

All  that was said about the story of the ups and downs of Persian painting  shows different pathways of painting art between Persian culture and  that of other nations. And these differences make it impossible to  classify Persian paintings with common international standards.  Alongside, the art of Persian painting has been limited to illustrating  books, especially religious books, to preserve its existence during the  time of its restriction, which led to developing a new form of taz'hib.

Paying  attention to the art of taz'hib in Persian painting has given birth to  various unique styles such as tasheir, toranj, and shamseh.